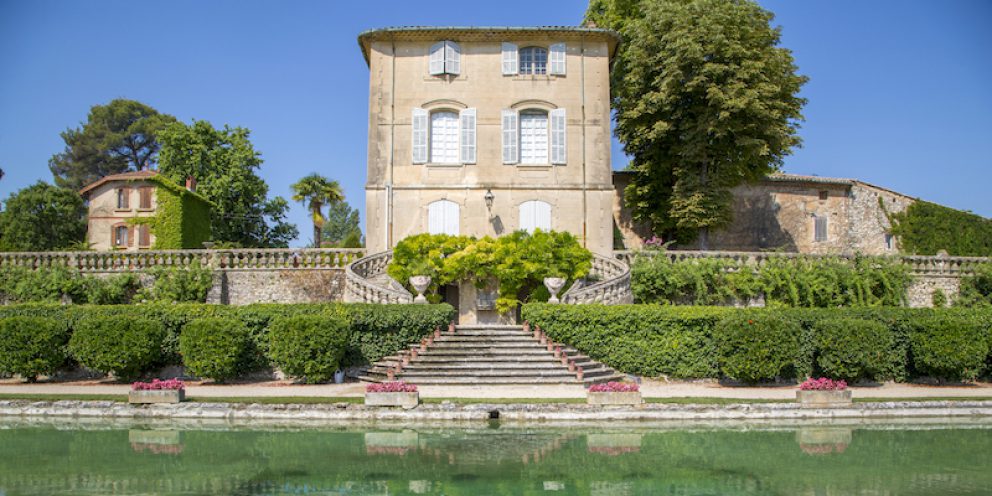 A bastide is a large residence that was once a country home and agricultural estate. It was a sound investment, a second home, a place of rest and relaxation, and due to its sumptuous décor and charming gardens, it was also a sign of belonging to the privileged, wealthy classes in the 16th and particularly the 17th and 18th centuries...

Les Pinchinats between Aix and Puyricard

La Bastide de Violaine: The layout appears to be directly inspired by that of the garden of Le Nôtre for Versailles – all the proportions are retained – Beautiful statues are scattered along the paths leading to a perfect little boxwood maze. Enigmatic like many gardens in Provence due to the originality of its composition, the richness and variety of the spaces set out over a small surface area, Violaine demonstrates the close relationship between the nobility of Aix and the greatest contemporary artists.

La bastide de Romegas: ’Roumegas’ planted with brambles, dating from 1640-1650 and transformed in the 18th century. Two treasures to discover during your visit: the boxwood bed and its ‘thèse’. Magnificent view of Mont St Victoire.

Château de la Mignarde, famous for having housed Pauline Borghèse in 1807, is one of the bastides that is most repre- sentative of the Aix spirit of the 18th century.

The façade covered in stone dominates an 18th century garden designed by Nicolas Ledoux, decorated with pools and statues.

Situated in the Luberon, for several years Château de Val Joanis bore the coat of arms of Jean de Joanis, Secretary of King Louis III of Naples. Rediscovered in 1977 by Jean- Louis Chancel, the castle has 186 hectares of vineyards. The jewel of the property, aside from its wines, is the garden created in 1978 by Mme Chancel. There is wine tasting at the end of the tour

Hidden in the vegetation amongst the prairies and vineyards, Château de Fonscolombe, built in 1720 for an eminent family of Aix parliamentarians, the Boyers of Fonscolombe, first reveals its rear façade before showing its southern façade, which opens onto the park, stretching out as far as the eye can see and giving the home its charm.

Château d’Arnajon, was owned in the 17th century by an Agoult, then in turn by the Lord of Beaulieu, Jacques Leblanc, Paymaster of France in Provence, and is currently owned by the descendants of the Deleuil-Martiny.

Bastides and Gardens of the Aix region

Individual price from: € 35 per person + entry fees to sites

Exclusive: thanks to the Tourist office, the bastides that are still inhabited today are open to visitors when the owners are available. The 2 tours on offer must be accompanied by a tour guide from the Office.

One day in Aix

In the painters of light's footsteps